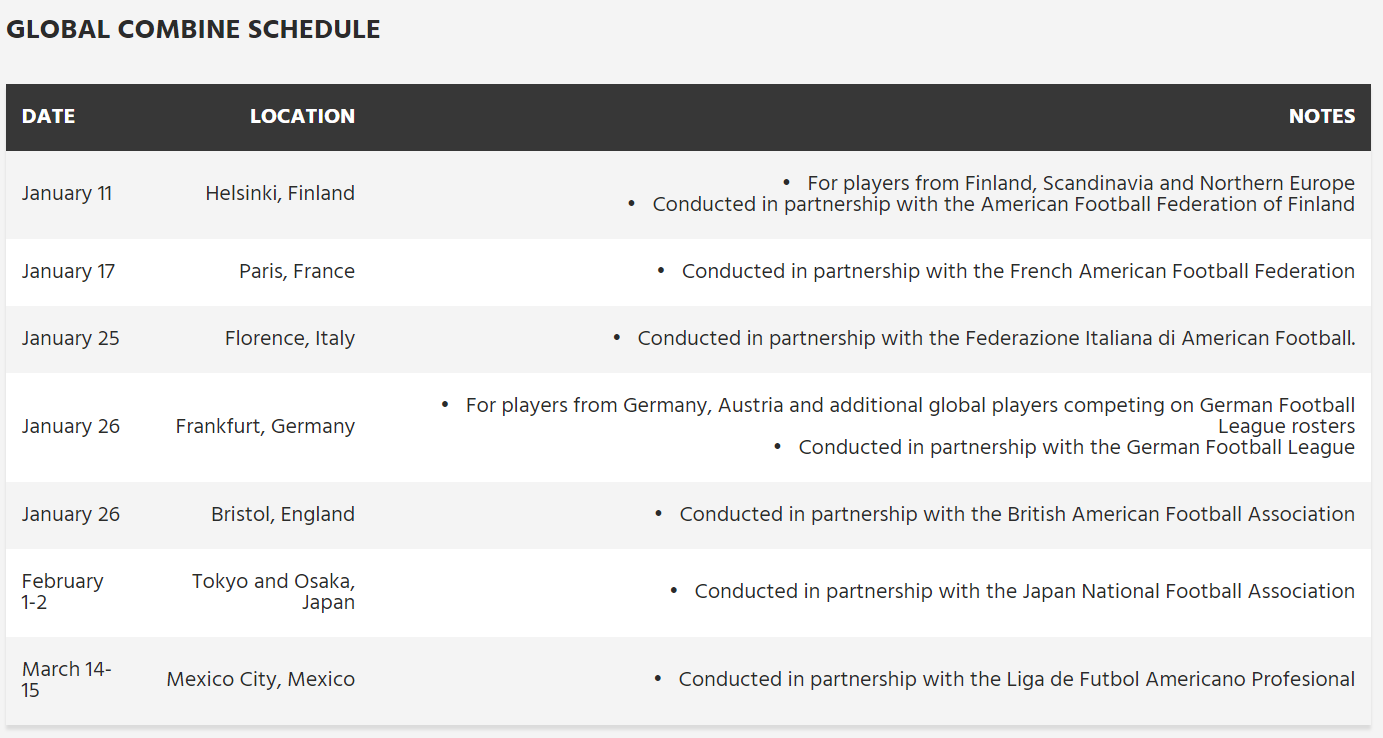 The Canadian Football League (CFL) has announced the off-season schedule in anticipation of the 2020 season. The calendar of events features a series of Global Combines in Europe, Mexico and Japan as the league increases its number of global players.

“Becoming a more global league, and expanding our international footprint, are important pillars for our vision of CFL 2.0,” said CFL Commissioner Randy Ambrosie.

“We’ll travel the world in search of the finest football talent, and at the same time, we’ll continue working closely with our international partners to create more opportunities for Canadian players to develop their skills and continue their careers.”

The CFL Global Combines are designed to assess and measure the size, speed, athletic ability and football skills of top players from outside Canada and the United States who have aspirations of playing professionally in Canada.

The international combines will be attended by representatives of the CFL league office and its yet-to-be-appointed Director of Global Scouting. The top players will be invited to Toronto from March 26-28 for the 2020 CFL Combine which will feature international prospects competing alongside their young Canadian counterparts from U SPORTS, the NCAA and junior football. The league’s biggest scouting event will be followed by two separate drafts in the spring – one for global players and one for Canadians.

In 2019, the CFL featured designated ‘global players’ from countries outside the U.S. and Canada on its nine member clubs – a first for the league. Next season, the number of global players per team will grow from up-to-three to as many as five.

As the CFL continues to deepen its international footprint and introduce new pathways for Canadians to play, it has also partnered with the leading gridiron football federations and leagues in Austria, Great Britain, Denmark, Finland, France, Germany, Italy, Japan, Norway, and Sweden, and is in discussions with others.

The individual partnerships and the group as a whole are focused on working together to grow the game of gridiron football by encouraging youth participation, increasing opportunities for players and seeking new streams of revenue.

“We are all committed to lifting each other up as we elevate the game all over the world,” added Ambrosie.