It wasn’t the first time it’s happened and if you ask Pierre Trochet, that makes it even better.

Friday’s game in Hamilton saw a pair of French American Football Federation players going up against each other in Hamilton’s Valentin Gnahoua and Edmonton’s Maxime Rouyer. They saw each other on the field for the first time on Sept. 20, when the Ticats travelled to Edmonton.

What made Friday’s meeting special was that Trochet, the head of business operations and international relationships for the French Federation, was in attendance at Tim Hortons Field to see two of his former players.

Gnahoua, the first-overall pick in the league’s inaugural European draft this spring, had a tough special teams tackle on Edmonton returner Christion Jones late in the Ticats’ 42-12 win over the Esks. The 25-year-old has played in eight games this season and has four special teams tackles, with one defensive tackle.

Rouyer, also 25, was the fourth-overall pick in the same draft. He has played in all 15 of Edmonton’s games this year and has two special teams tackles.

“It’s a whole change of life, for sure,” Trochet said of the move that the players have had to make. “But you have to embrace it.”

It’s been an adjustment in every sense. Both were helped in their introduction to the Canadian game having played previously for McGill University. But after playing for the French league, where they play with American football rules, they’ve had to come back to Canada and play three-down football at a much higher level.

“Definitely I’m feeling lucky. Very lucky,” Gnahoua said. “This was my dream, to come play in the CFL.”

It’s been an uphill battle. Gnahoua is still working on his English — it’s better than he thinks it is — and is working at carving out his place on a Ticats’ team with Grey Cup aspirations. So far this year, he’s had positive moments. A big tackle on a returner one game; the shoestring tackle he had on Jones on Friday. They’re the building blocks for someone that is a pioneer in a sense for the league’s CFL 2.0 initiative.

“Every day I receive the message from another player in France to say, I’m proud of you, to keep going, that you represent the French people,” Gnahoua said. “I’m not the leader but I want to do the perfect thing here for the next generation.”

Earlier on Friday, the CFL and the French Federation announced the next steps in their partnership. They’ll hold a CFL combine for the top-20 players in France on Jan. 17, 2020.

“The top-20 athletes will attend by private invitation and then the CFL staff will decide who to have at the (draft),” Trochet said. “We’ve had four players active (in 2019) and I just learned (wide receiver) Benjamin Plu in BC will be active (this week), so we’ll have five.

“I’d assume that we’re the biggest nation (in CFL 2.0) on the active roster. It’s pretty good for a small football country.”

CFL commissioner Randy Ambrosie said on Friday that he wants the partners of CFL 2.0 to be in win-win situations, where the game grows in both nations.

While each CFL team has two players with global roster designations this year, that number will grow to up to five next year, with two on the active roster and room for three players on the practice roster.

Trochet is optimistic that the CFL could play a game in France by 2023 before Paris hosts the 2024 Summer Olympics. By then, partner nations like France would have Canadian players on its rosters, giving CFL prospects a chance to continue to play the game.

For now, players like Gnahoua are doing everything they can to take advantage of their opportunity. As soon as he learned about the possibility of playing in the CFL, Gnahoua made it his goal.

“I don’t have the words because it’s my first year here,” Gnahoua said of his experience thus far.

“But I’m very happy to be with this team. It’s very different, I have a lot of things to learn. I enjoy winning,” he laughed, “and when we’re together it’s like a family.” 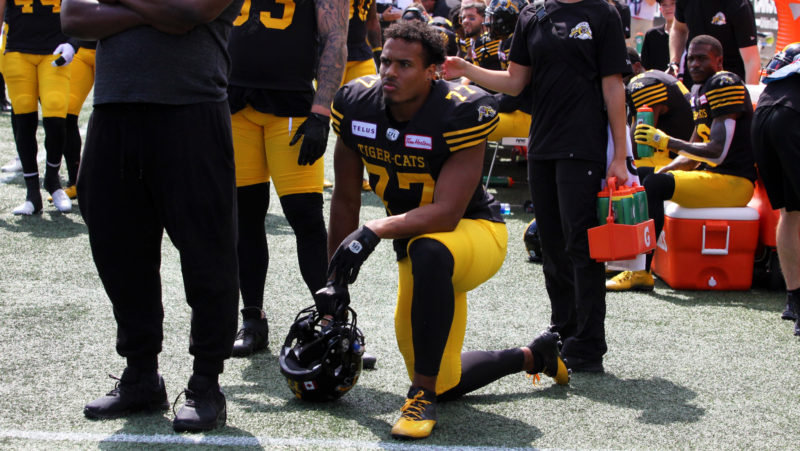 Trochet, a former football player himself, stood on the sidelines in Hamilton during the pregame and took in the atmosphere. The league has existed in France since 1982, but football is still developing its culture in France. Trochet saw plenty of opportunity around him on Friday, both with the on-field product and how the game is presented.

He remembers the failed NFL Europe experiment and how it never felt like a partnership.

“The CFL, Mr. Ambrosie was different from Day 1,” he said. “It was about talking, it was about listening. It was about learning from each other.”