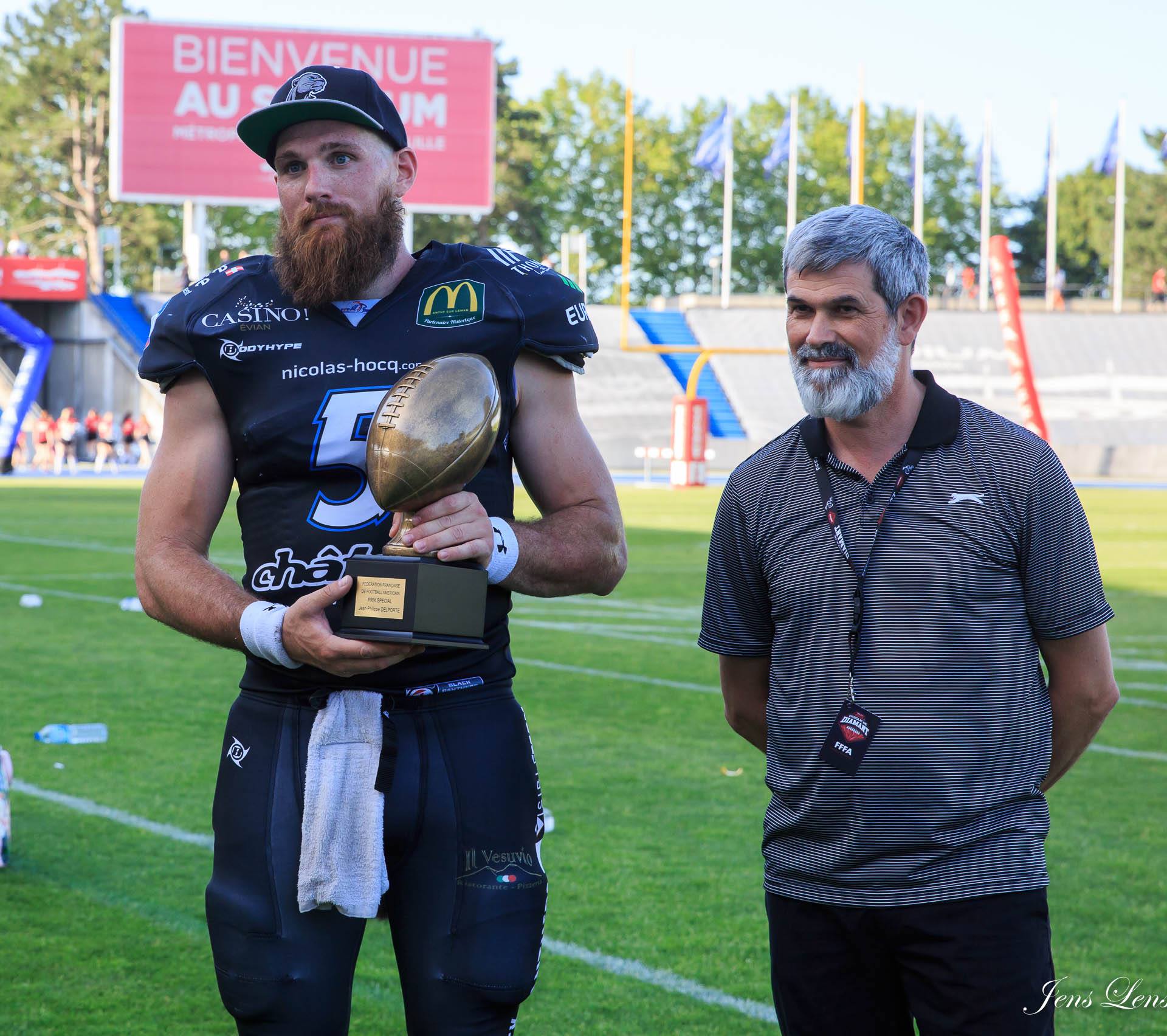 French League of American Football MVP Clark Evans: “Wonderful to be rewarded for all of the hard work”

The French League of American Football wound up a week ago with the Thonon Black Panthers coming from behind and defeating the Saint Ouen I’Aumone Cougars 24-7. to win the 2019 Casque De Diamant.

Although the Cougars had the advantage in the first quarter, the Panthers were able to equalize in the second period and then turn the score around in the next half. Quarterback Clark Evans threw for two touchdowns. Wide receiver Benjamin Plu was named Game MVP while Evans was named Most Valuable Player of the season which is not a surprise. He was solid all year long and stepped up as one of the leading figures for the Black Panthers.

He was grateful to the club, the staff and his teammates for finishing an outstanding season. The 28-year-old quarterback also spoke about his future in Europe. American Football International: Congratulations on becoming the season MVP. What is it like?

Clark Evans: It is a great honor to be named MVP of the entire league and I could not have done it without an amazing effort from all of my teammates. My offensive line was amazing all season, our coaching staff always put us in the right position, and our receivers did a great job not only getting open but also blocking and making the big runs happen. While winning the MVP is never the main goal for my season it is very nice to be rewarded for all of the hard work and effort I put into this season.

AFI: What is it like to be French Champion after reaching the top in Switzerland?

CE: Getting to continue my football career in Europe is already a wonderful experience and now adding to that 3 championship seasons in 2 countries has been amazing. Being apart of 2 clubs that do such a great job promoting a winning atmosphere, I could not ask for anything more.

AFI: The game did not start so well after the Cougars got the advantage. What happened at the start?

CE: Penalties and sloppy play in the beginning allowed the Cougars to take the lead but once they scored I think our guys stepped up and we started to play our game.

AFI: What was the turning point for the Panthers in the game that gave you the win?

CE: I think going into the half we knew that we had not played even close to our potential and the game was still tied at 7. So all we had to do in the second half was come out strong and just execute not do anything special or different just play our game and do what we have done all season long. AFI: The Panthers became French Champion after an unbeaten season. How would you summarize the championship for the team?

CE: It was an amazing experience to get to play for the best organization in France, the Thonon Black Panthers. They gave us everything we needed in order to come out on top of every French league game. I would like to thank everyone who came and helped out our club in anyway this season we could not have had such a great season without all of our supporters.

AFI: Are you satisfied with the team’s performance in the playoffs?

CE: I am very satisfied with our performance all year long and especially in the playoffs. Anyone who has been around football knows anything can happen in the playoffs and while we may have not had as much success statistically we were able to still win convincingly in both our playoff games. Our defense showed that they were the best in France and on offense we played off of our D and were able to do enough to become champions. AFI: What about the next season? What are your plans?

CE: My plans for right now are to coach and try and win a championship back in the states at the high school level and as far as next year’s European season I have not made a decision yet but something could be coming soon.