The Asnieres Molosses will attempt to reach the French championship final for the first time in their history Sunday, June 16 when they play host to the Saint-Ouen L’Aumône Cougars in the semifinals of the French Federation of American Football.

These two teams met twice during the regular season with Asnieres coming away with comfortable wins in both games, 20-7 and 32-7

The Molosses earned the semifinal berth by winning the North Division with an 8-0-2 record and boasted by far the stingiest defense allowing just 48 points in 10 games. Their offense, while low scoring by most standards, still averaged 26 points a game in the last five games of the season. Quarterback Camille Thouary threw for 1,199 yards and 12 TDs, good for seventh in the league.

While past records favor the Molosses, this could be an emotional game for the Cougars as head coach and general manager Xavier Mas is stepping down after 20 years. The players are well aware of this and will no doubt be even more fired up. 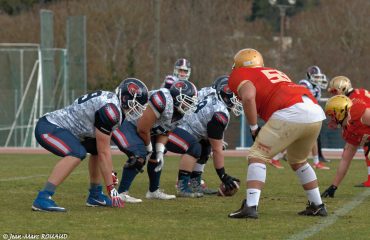