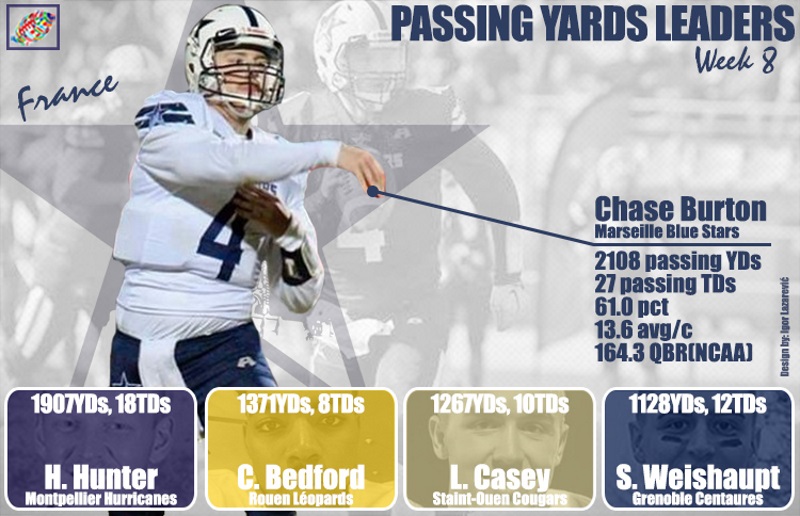 Stats leaders in France no surprise

With only two games left in the French Federation of American Football Elite division regular season, the Thonon Black Panthers remain unbeaten with an offense that leads the league in points per game.

QB Clark Evans is a key and still leads all rushers in yardage gained by a huge margin.

Marseille Blue Stars QB Chase Burton is another standout performer for his team and tops all passers again.

The  Marseilles Blue Stars and Amiens Spartiates both have three players among the three categories while the Montpellier Hurricanes and Rouen Leopards have two each. The Grenoble Centaures, Thonon Black Panthers,  St. Ouen l’Aumône Cougars, La Courneuve Flash and Aix–en-Provence Argonautes each have one representative.  The Bron-Villeurbanne Falcons, Asnieres Molosses,  and Evry Corsaires do not have a single player among the top five in any category. Marseille Blue Stars QB Chase Burton remains atop the passing yardage board after leading his team to a 6-2 record and throwing for 2,108 yards and a league-best 27 TDs in eight games.He is followed by Hughes Hunter of the Montpellier Hurricanes who has 1,907 yards and 18 TDs. Rouen Leopards QB Caleb Bedford has moved up to 3rd with 1,371 yards while Luke Casey of the St. Ouen l’Aumône Cougars is 4th with 1,267 yards.Grenoble Centaures pivot Sonny Weishaupt is 5th with 1,128 yards. Thonon’s Clark Evans still leads all rushers with 682 yards and a league best 8 TDs..  New on the list though is Amiens Spartiates RB Dylan Prajet who now has 557 yards, good for 2nd.  La Courneuve Flash RB Jason Bofunda has climbed up onto the list with his 463 yards and 5 TDs. Behind him are two more Spartiate rushers,Valentin Prioul with 409 yards and Darius Dawsey who is 5th with 404 yards. Montpellier Hurricanes WR Quentin Gramage had 150 yards receiving in the win over the Falcons and still leads all receivers with 922 yards and 11 TDs. Nicolas Cremer of the Rouen Leopards is now 2nd with his 687 yards while   Rudy Dumar of the Marseille Blue Stars is now 3rd. He has collected 467 yards. Dumar’s teammate Hadrien Lynda trails in 4th with 443 yards and 9 TDs. Aix-en-Provence WR Troy Rice has fallen down into 5th with a total of 417 yards.