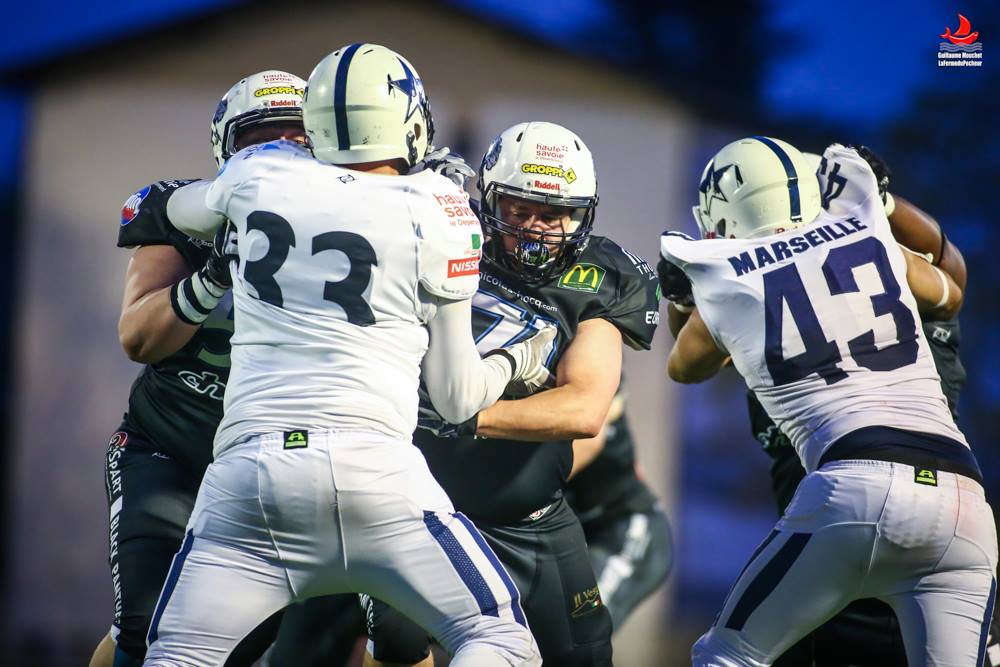 The Thonon Black Panthers and Marseille Blue Stars put up a real show for the crowd in Thonon les Bains, France which ended in a crucial 45-39 shootout win for the Black Panthers.

This win meant that Thonon is the first team to make the playoffs in the French Federation of American Football’s Elite League. Nevertheless, they had to defeat their biggest rival this season, the Marseille Blue Stars. It was not a simple task since Thonon had to come from behind to do it. But an outstanding third quarter performance gave them what they needed to win the game. Quarterback Clark Evans is happy about the win but said that they still cannot lay back.  Still, he emphasized, as the playoffs draw near, the team seems to be more confident and resilient. American Football International: You have made it to the playoffs with this important win against the Blue Stars. How does it feel?

Clark Evans: It was a very tough win against a very good opponent. It always feels good making it to the playoffs but our goals are higher than that. We still have a lot of work ahead of us, and have to improve every single week if we want to be on top at the end of this season.

AFI: How was the game because it seemed pretty tight?

C.E.: As I said before, the Blue Stars are a very good opponent they play hard and are a very well coached group. In the first half, they executed much better than we did and put our backs against the wall. After their first score in the third – I think– they really woke us up especially on offense. After that we went down four straight times and scored and then our defense started to feed off our energy and got the stops we needed to pull out the victory. AFI: Were you personally satisfied with the Panthers’ performance? Offensively it seemed great but the Blue Stars caused some trouble for the defense.

C.E.: Football is and always will be a team game and when our defense is having a tough time it is our job as offense to pick them up just as they have done countless times throughout this season for us. At the end of the day, our defense came up with enough big plays against a good team to win us the game.

AFI: Can you sit back until the playoffs or something still needs to be done?

C.E.: We will not be sitting back at all. We have three more tough games left this season and the next two will be especially rough because both Grenoble and Montpellier are fighting for the third playoff spot in the south and would love nothing more than to get a win against us to qualify for the playoffs. AFI: Do you think Marseille can be your greatest opponent in the title race?

C.E.: I am not sure. I know there are some good teams fighting it out in the North so I cannot really compare Marseille to them. But I do know anyone who has to play Marseille in the playoffs has a tough task ahead of them. The Blue Stars are a really good football team.

AFI: How is the team’s form before the playoffs?

C.E.: Just like every other football team coming up on the end of the season, we all have our bumps and bruises but I think we are starting to come together as a team. After going through a tough loss in Austria and coming from behind to win against the Blue Stars, I believe this shows how resilient our team can be. And as we grow together and gain confidence I would not want to have to play us in the playoffs.