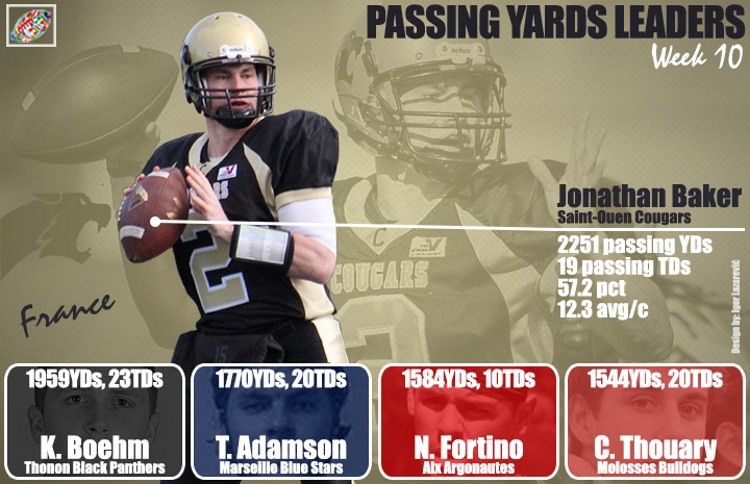 The final season stats in France are out and two of the three leaders are heading to the playoffs while passing leader, Jonathan Baker and his St. Ouen l’Aumône Cougars are headed home.

Three teams, the St. Ouen l’Aumône Cougars, Marseilles Blue Stars and Asnieres Molosses are battling for the final two playoff berths so the stats races take on a special meaning.

The Thonon Black Panthers and Marseilles Blue Stars have three players among the three categories while the  St. Ouen l’Aumône Cougars, La Courneuve Flash, Asnieres Molosses and Aix-en-Provence Argonautes have two each. The Bron-Villeurbanne Falcons have one player. The Rouen Leopards do not have a single player among the top five in any category. St. Ouen l’Aumône Cougars quarterback Jonathan Baker finished the regular season as the top passer in France  after throwing for 271 yards against  Asnieres Molosses. He wound up with 2,251 yards and 19 TDs. Kyle Boehm of the Thonon Black Panthers finished 2nd with 1,959 yards and a league-best 23 TDs  while Travis Adamson of the Marseilles Blue Stars wound up 3rd with 1,770. He also has thrown 20 TD passes.  Aix-en-Provence Argonautes QB Niko Fortino finished 4th with 1,584 yards and 10 TDs.  Camille Thouary of the Asnieres Molosses held onto 5th with 1,544 yards. Hadrien Lynda of the Marseilles Blue Stars held onto the lead to finish the year as the leading receiver in France with 726 yards and 8 TDs. WR Jeff Alexandre of the league-leading Thonon Black Panthers stayed in 2nd with 638 yards and 9 TDs. Behind him in 3rd was Aix-en-Provence WR Aymeric Nicault who finished with 543 yards. Cyprien Virot of the Bron-Villeurbanne Falcons wound up 4th with 533 yards and 6 TDs. Thonon WR Benjamin Plu took over the number 5 spot on the final day of play finishing with 450 yards and 7 TDs. As he has for the last half of the season, Asnieres Molosses WR/QB Jordan Moore finished the year as the rushing leader in France with 822 yards rushing. Still well behind in 2nd was Pereese Joas of the Marseilles Blue Stars with 588 yards.  La Courneuve Flash RB Nicolas Khandar finished 3rd with 503 yards and 4 TDs. Behind him in 4th is Isaac Amoako of the St. Ouen l’Aumône Cougars who wound up with 498 yards while Jason Aguemon of the Flash is 5th with 373 yards.